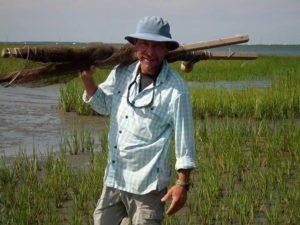 Captain Barry's exploits include setting up logistics in areas impacted by natural disasters.  He is a disaster relief volunteer for the American Red Cross and other non-governmental organizations (NGO).

He also volunteers locally on Chincoteague Island and most recently returned from Lumberton NC where Hurricane Matthew did the most damage.

"Captain Barry’s Backbay Cruises does educational eco-tours of the bay led by the endearingly wacky Captain Barry, who guides you through multiple stops to collect shells, eat raw oysters, and get your feet wet while digging for sand crabs and trawling for sea creatures."  Forbes Magazine article Forget the Hamptons, Chincoteague Island is the Place to Be

Baltimore Magazine says this: "The Tour: This isn’t a sit-back-and-relax boat ride. On a trip with Captain Barry Frishman, you can expect to get dirt on your hands and mud between your toes. Frishman, who has been called the “Indiana Jones of the Chincoteague,” is on a mission to expose people—both kids and adults—to nature as closely as possible. That means docking his pontoon boat on sandbars and digging for clams, foraging for snails and hermit crabs, and learning how to shuck—and slurp—an oyster. “There’s a whole generation of kids growing up on laptops,” he says with despair. “I like to get people out of their comfort zones. I like to blow minds.” Your Guide: Frishman, who has been operating these tours for more than 25 years, is a whirlwind of energy and an encyclopedia of Chincoteague wildlife. He keeps the tours limited to six, so he can “crawl around on his hands and knees” with every passenger."

"At first, our son, Zephyr, was grumpy and unenthusiastic. Slowly, though, Captain Barry got them excited. There was a stop to do some shelling for materials for their future art projects. Then Zephyr plucked periwinkles from marsh grasses and watched them unfurl, looking like alien snails. They got to touch a beached jellyfish before dragging a net through the water to capture a glistening, flip-flopping mass of minnows. The last stop was a crab trap, where they learned how to hold a blue crab by its rear paddle fins so it couldn’t pinch them. '“That was so fun,” Zephyr gushed as we piled back into the car. “Can we come again next year?' We were all already looking forward to coming back to Chincoteague for more idyllic calm — and another spin around the bay with Captain Barry.” Read the complete article, "On Virginia's Chincoteague Island - all this and ponies, too" by Nevin Martell in the Washington Post